Sea-level rise and increased storminess present huge challenges to coastal engineers and governments worldwide. The seaward slope of many breakwaters and shoreline defence structures consists of thousands of interlocking units of concrete or rock, making up a massive granular defence against wave attack. 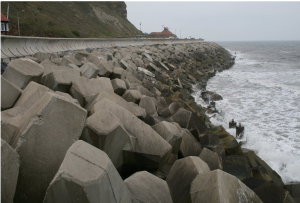 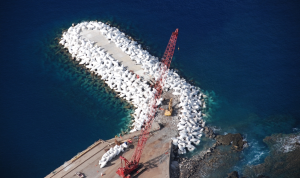 The units are placed freely to form an armour layer which is intended to both dissipate wave energy and remain structurally stable through interlock and friction. The two main failure modes for concrete armour layers are displacement (hydraulic instability) and breakage (structural instability) which are often combined. The FEMDEM modelling attributes of Solidity are ideally suited to address this fragile multi-body problem.

Available unit types exist in many shapes. To resist wave action, very large (often >3m across, >20 tonnes in mass) units may be required. 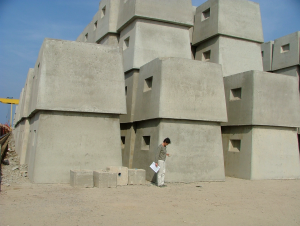 The deployment of the ACCROPODE IITM unit to a small harbour project in Cerbère, France is illustrated by a short video produced by the unit’s design company, Concrete Layer Innovations. A second video shows a severe storm striking Cerbère harbour soon after completion in March 2013. There appears to be negligible damage.

The key dimensions of the breakwater slope and bathymetry are set out and underlayer rocks sampled from a shape library. These are scaled and deposited numerically to create realistically rough substrate upon which to receive the armour units. 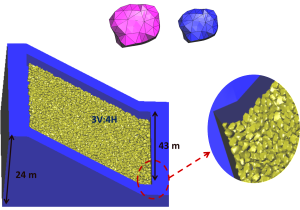 Many types of units are placed with a reference row-column layout that appears pseudo-random with a lozenge structure still visible after construction. 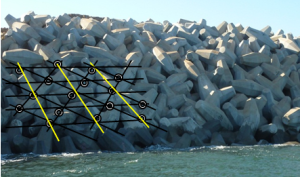 To numerically place the units on the rough rock surface, protocols such as those illustrated in the video below have been developed which utilise Solidity’s multi-body capabilities. It is important to evaluate whether the numerically built structure has spatial properties that are representative of the coastal structures built by crane operators and/or the hand-built laboratory scale physical models constructed in the hydraulics laboratory. Analysis tools are of particular benefit to examine whether placements agree with acceptability criteria set by designers and unit developers.

Structures with other novel units, for example those requiring a more regular packing structure, but also individually placed and held together by friction and interlocking forces, can also be constructed.

Solidity can simulate the transient dynamic response of the granular structure to disturbance and hence parametric studies of unit stability can be performed. One approach is to apply a vibrating boundary condition. This can give a good indication of how a simulated structure might respond to a powerful earthquake neglecting the effect of the water as shown in the video below.

To increase realism and applicability to coastal engineering, a second approach is to apply the oscillatory disturbance forces of storm waves. These have a complex variation through time and position on the structure, and can be added to give a one-way coupled simulation, i.e. one that has fluid motions un-affected by movement of the solid units. Alternatively, the physical processes can be modelled as a two-way coupled problem where the incoming waves generate a fluid response that also takes account of the solid movements.

Wave-structure interaction CFD models using numerical wave tanks (NWT) are starting to be used for evaluating hydraulic performance where reflection, run-up and overtopping is captured by detailed flows within the armour layer systems. The solids are simply fixed boundaries and these simulations do not simulate unit movements and structural stability.

The new virtual breakwater WAVE PROXY TOOL is a work flow that enables a designer to model the structure and its armour system response to a random wave sea state. The armour unit stability and movements under wave action are modelled as a one-way coupled problem. Fluid pressures and associated wave forces are calibrated from numerical wave flume simulations using RANS VOF codes, IHFOAM and IH2VOF, (e.g. Higuera et al. 2014). Pressure-time histories for the design storm acting upon armour unit surfaces provide hydraulic forcing terms for Solidity to combine with contact, body and inertia forces in a time-marching solution defining the motion (i.e. stability) of the armour units. The different positions of units before and after severe storm action were measured by LiDAR survey on the Kaumalapa, Hawaii Core-Loc breakwater (Podoski 2008). The degree of damage can be visualised in simulations of storm action on concrete armour unit (CAU) structures using similar position overlays from the simulated results as shown below. 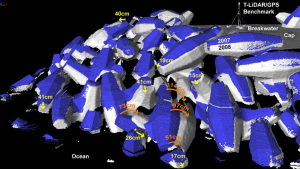 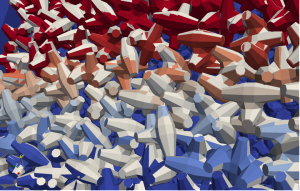 Results in the videos below show the virtual breakwater WPT has the ability to simulate the response of a Core-Loc structure to large regular waves.

The response for a 100 year return period sea state has also been modelled for a sequence lasting 300 waves or one hour of real time. The production of a smooth running video of the storm is constrained by computer memory. Note that the figure below captures one instant from a relatively small sample of moments of a 100 year simulated event. A significant number of armour unit motions take place together. 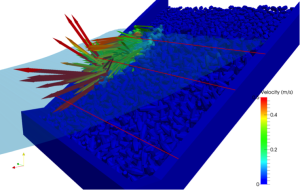 Two-way coupling of Solidity with Fluidity has also been achieved. This technology embraces adaptively refining and coarsening unstructured meshes in the fluids and stress development in deformable solids, with force balance on the solid-fluid interface. The video below shows a remarkably realistic response of a cluster of five Core-Loc units when they are dislodged and further disturbed by incoming waves. Note the hot colours of the stress components show up the development of high dynamic tensile stresses where concrete units could be prone to fracture. Solidity has both deformable constitutive behaviour and rigid behaviour options. Elastic-plastic relations can be used to examine the damping effect of crushing near contacts. Brittle fracturing can also be modelled in Solidity.

Finite element positions together with contact forces and stress components in addition to hydrodynamic forces and free surface elevations deduced by hydrostatic pressures are available for the duration of the simulated process, depending on the sampling interval of dump files. These provide the analyst with a huge amount and range of information. The analysis tools that have been developed that are considered most likely to be useful to the breakwater engineer include: