The study of particle systems have a wide range of applications from soil mechanics to powder technology. Nevertheless, many questions on their mechanical behaviour are still open. In particular the exact mechanism for transmitting loads between neighbouring particles with ‘force chains’ is still obscure. Figure 1 shows the force chains and the magnitude of the maximum contact force in [N] experienced by some grains in the chains. These simulation results show the mechanism utilised by the structure of particles to transmit the load to the container walls and base. The topology and magnitude of the contact force that is transmitted in the force chains is strictly related to the properties of the pack and ultimately to the shape of the particles. The aim of this research is to study the relation between pellet shapes and quality of the force chains.

This type of study has been done by evaluating the maximum contact force statistics in experiments with photo-elastic stress analysis [Da Silva 2000 and Majmudar 2005] and comparing them with corresponding numerical results [Majmudar 2007]. The AMCG at Imperial College London acquired two different load and frequency range pressure sensor pads (supplied by Teckscan) and has undertaken preliminary research to obtain experimental statistics of the contact force history against a surface that has been instrumented with such sensors. The research group has also been provided with about five hundred complex-shaped identical particles. As shown in Figure 2a, these particles have a cylindrical cogged shape with four holes. The shape of these bodies has been reconstructed with photogrammetry and CAD software, in order to define the equivalent numerical mesh shown in Figure 2b. Figure 3 shows the mesh discretisation from the preliminary results of a pile test with four hundred and ninety of these complex-shaped pellets. 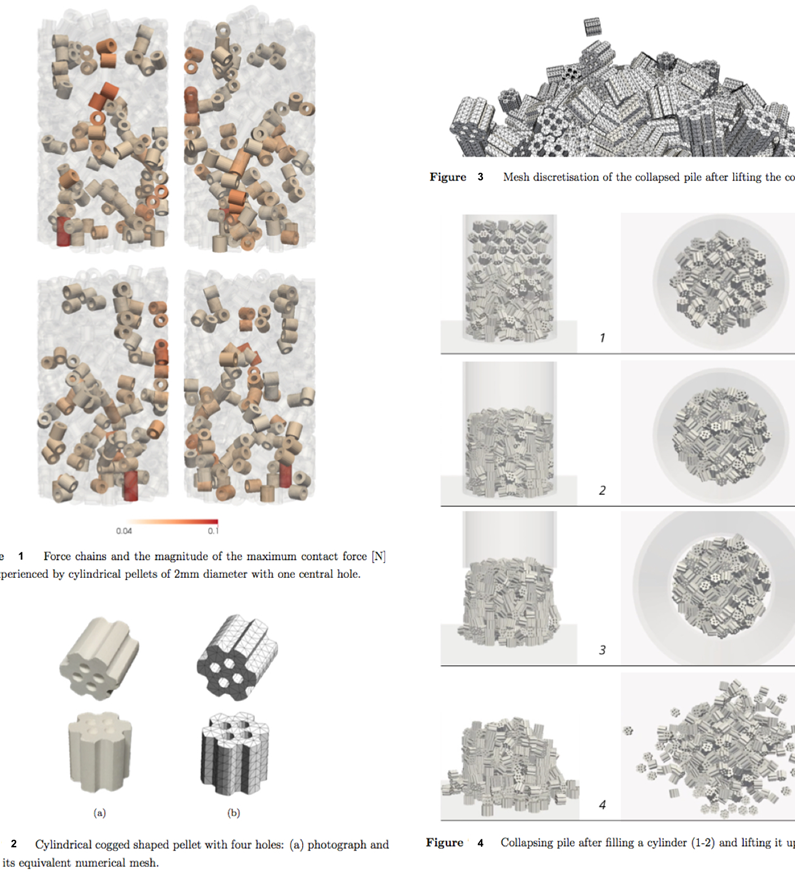 The successful candidate will collaborate with Dr Ado Farsi to design and perform experiments on a surface that has been instrumented with the pressure sensor to obtain the contact force history of a collapsing pile against a flat surface during the filling and lifting of a container. Figure 4 shows the time-lapse of the corresponding preliminary numerical simulation from which the contact force history can be extracted and compared with the experimental results.

One of the poorly understood features of the granular mass cylinder and cone at its base is the uneven sharing of the overburden load and contact force statistics as the pile builds up and is then allowed to collapse.